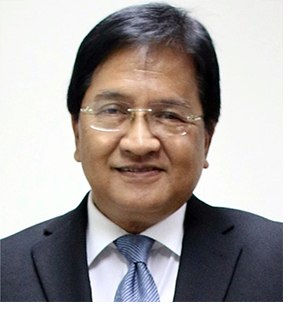 Cielito Habito is a Professor of Economics at the Ateneo de Manila University, where he is also a Senior Fellow and former Director of the Ateneo Center for Economic Research and Development. He is also Chairman of Brain Trust Inc. and Operation Compassion Philippines. His op-ed column “No Free Lunch” appears twice weekly in the Philippine Daily Inquirer. In 1992–1998, he served in the Cabinet of former President Fidel V. Ramos as Secretary of Socioeconomic Planning heading the National Economic and Development Authority. In 1998, he was elected Chair of the Sixth Session of the United Nations Commission on Sustainable Development in New York. Before joining government, he was Professor and Chair at the Department of Economics of the University of the Philippines (UP) Los Baños. He had also worked at the World Bank, Harvard University, Center for Southeast Asian Studies in Kyoto University, and Asian Development Bank Institute in Tokyo. Over the years, he has been tapped by multilateral and bilateral development agencies to advise the government of the Philippines and of other countries in Asia-Pacific and Latin America. He has served on the boards of First Gen, Sun Life Financial, Manila Water Company, Metrobank, and Philsteel Holdings, among others. He holds a PhD and MA in Economics from Harvard University, Master of Economics from the University of New England (Australia), and BS in Agriculture major in agricultural economics (summa cum laude) from the UP.